Lift, along with thrust, weight and drag, is one of the main forces which come into play on an aircraft in flight. Any fluid which flows around the surface of a body exerts a force on it. The component of this force that is perpendicular to the direction of the flow is lift, while the component which is parallel to the direction of flow is the drag. Lift is not a force only associated with flying; it is a force caused by all fluids, and is experienced by marine vehicles as well.

The term lift is most commonly associated with aircraft, which is why most think that it always opposes gravity. However, this is not always the case. If an aircraft is flying straight and level, then true, most of the generated lift opposes gravity. In the case of race cars however, their spoilers generate a lift force which points downward! This force is responsible for keeping the car firmly on the ground. In sailboats, the lift produced by the movement of air around the sail points sideways. So as seen, lift does not always have to point upwards.

In this post, I will be focusing on lift as generated by aerofoils. This lift, which is generated by the movement of air around an object, is known as aerodynamic lift.

A Simple Explanation of Lift

There are many ways to explain lift: one can use Newton's Laws of motion directly, or one can use Bernoulli's principle.

Newton's Law of Motion state, among other things, that every action has an equal and opposite reaction. An aerofoil deflects the air the flows around it downwards, in the process exerting a downward force on the air. This, courtesy of Newton's Third Law, causes the air to push the wing upward. (Right): A wing being pushed up as it pushed the air around it down.

Bernoulli's Principle (discussed here) states that the faster a fluid flow, the less pressure it exerts around it. Air over an aerofoil speeds up and exerts less pressure, causing the slower air under it to produce a net upward force-hence, lift. However, this explanation is not entirely satisfactory. For one, the explanation does not describe why the air flows down over the wing. For conventional cambered wings, one can say that the curved shape of the wing causes parallel moving air to hit it, slowing it down; however, even flat wings, sails and upside-down wings generate lift. These are not explained by this theory.

A common explanation for lift is that, as air splits over and under a wing, the air on top has to cover a longer distance, and thus travels faster. Then, through Bernoulli's Principle, it has lower pressure than the slower air under it, thus generating lift. However, there is no reason why air particles which were in the same line before hitting the wing should be in the same line after doing so, and this is confirmed by real world tests. This is a often given as the reason for lift, but it is not correct. (Right): The explanation provided on the right is not correct.

Now, while the other two elucidations do give correct answers as to why lift is generated, they do have holes in them, as stated above. A more complete explanation for the production of lift requires a deeper understanding of the way fluids flow in fields.

First, consider the situation where a paper is hanging vertically. Blow air down one side of the paper, and hypothesize about its movement. You will think that, since there is clearly a difference in the velocity of the air between the side you blow next to versus the other side, the paper will move towards the side you blew next to, courtesy of Bernoulli's principle. However, you will observe that the paper does not move. This is because Bernoulli's Principle does not describe the relationship between two streams of air separated by an object, as in the case of the paper, or a wing.

To better explain lift, we have to consider some other situations. Consider first a particle of fluid i.e. a small quantity of air moving in a straight line. If pressure increases behind the particle, it will be pushed forward, and will accelerate. Conversely, if the pressure behind it decreases, then it will decelerate. This is proven by Newton's Second Law.

Next, consider a particle travelling in a curve. Because it is constantly changing direction, it will be subject to centripetal force, which must be caused by something else, i.e. another force. This force has to be a pressure (all other forces not counted). Thus, across a curve, the pressure is higher on the outside than the inside.

It is by the exploitation of this phenomenon that wings generate lift. A curved wing moving through the air will cause the air it hits to split and curve around it. The curved stream of air that flows above the wing will induce an area of low pressure under it (and between the top of the wing) while the stream that flows below the wing will induce an area of high pressure above it (and below the top of the wing). This creates a zone one high pressure just under the wing and an area of low pressure just above the wing surface, causing lift. 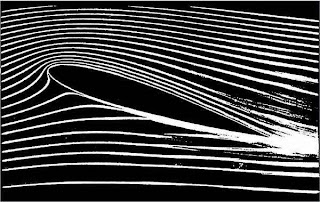 Thus, this offers a much more complete explanation for the cause of lift. The other two are not wrong, but nor are they completely right, and I prefer a proper, long explanation to an incomplete, short one.

Please read this article here for more information.
Posted by Unknown at 8:22 AM