A rocket engine is one of the most common forms of propulsion used on spacecraft and missiles. They are a form of jet engine that do not need any external material to generate thrust. They are the lightest and most powerful of all jet engines, while also unfortunately being among the least efficient.

Their ability to work in a vacuum is one of their most appealing features. This is the main reason for their usage in space-faring craft and vehicles that operate at very high, near-space altitudes.

There are several types of rocket engines:
General Working

Rocket engines work on the principle of Newton's Third Law of Motion: Every action has an equal and opposite reaction. They accelerate a fluid to very high speeds to achieve movement in the opposite direction.

The fluid is usually a gas, which is created by the high pressure combustion of propellant and then accelerated to supersonic speeds by an exhaust nozzle. Water is also used as fluid in smaller model rockets.

A liquid fuel engine, which uses liquid fuel and oxidizer pumped from different tanks, has another component known as an injector which injects the liquid fuel and oxidizer into the combustion chamber. They can be simple holes in a sheet or more complicated nozzles. Usually, they are built in such a way that when they cause the two or more liquids to collide, the liquids break into tiny droplets, making their combustion easier.

Combustion Chamber
The combustion chamber is the area where the actual burning of the propellants takes place. In most rockets, it is a simple cylinder within which combustion occurs.

Nozzle
The nozzle is the part of the rocket engine which is responsible for accelerating the exhaust gas to high speeds. To do this, a nozzle must be supplied gas at a pressure around 2-3 times the ambient pressure. When this is done, the nozzle "chokes" and accelerates the gas to supersonic speeds. 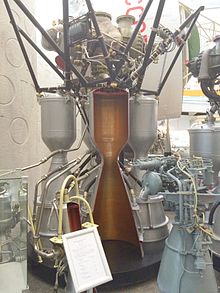 One of the most commonly-used nozzles on rocket engines is the de Laval nozzle, a fixed converging-diverging nozzle which gives rocket engines their iconic, downward-cone shape. The pressure of the gas as it exits the nozzle is one of the main factors determining how efficient the engine is. Ideally, the exit pressure should match the ambient pressure of the air around it at all times. However, since the ambient pressure changes as the rocket climbs higher, this cannot always be done. The solution is to change the diameter of the nozzle as the pressure around it decreases, but this is difficult to achieve in a lightweight manner. (Right): A de Laval nozzle.

There are many proposed solutions to this problem, including the plug nozzle, the stepped nozzle and the aerospike. (Above left): An aerospike engine being tested.

Rocket engines are used in almost all spacecraft and missiles. Some of the most famous of these are given below. 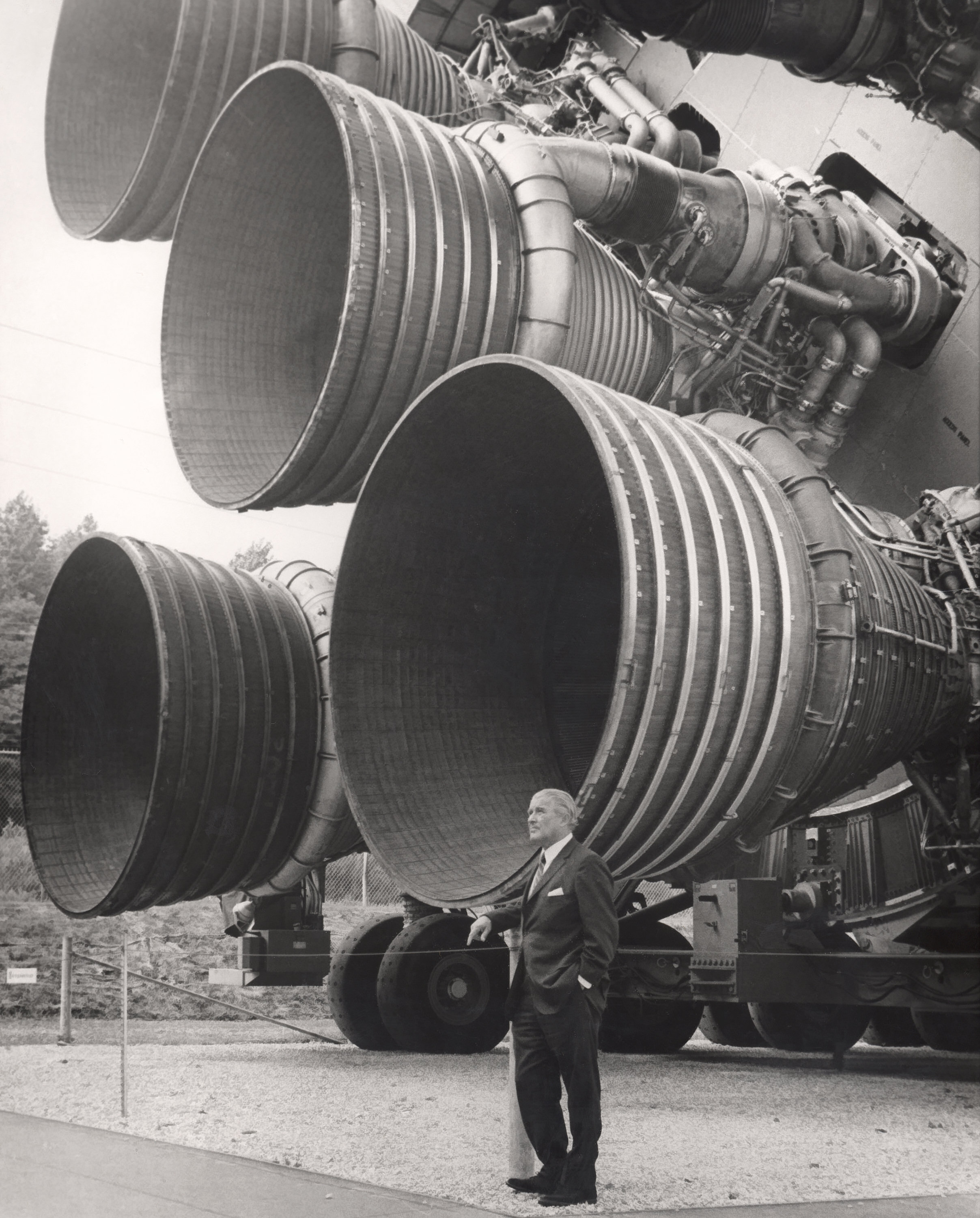 (Above): Wernher von Braun standing in front of the five massive Rocketdyne F-1 engines that propelled the Saturn V rocket. 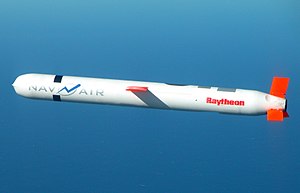 (Above): A Tomahawk missile in flight. This missile is propelled by a rocket engine.