Afterburners are one of the most iconic feature of modern fighter aircraft. Who doesn't love the twin spikes of flame the burst out from the engines of a fighter? Afterburners are the machines that are responsible for this incredible sight.

Afterburners are a method of increasing thrust massively for a short amount of time. They are used almost only on military combat aircraft to augment the thrust output of fighter aircraft jet engines. They are used to achieve short bursts of very high velocities for use in certain situations.

Afterburners may look cool when switched on, but they consume fuel voraciously. They are thus used only when really needed. 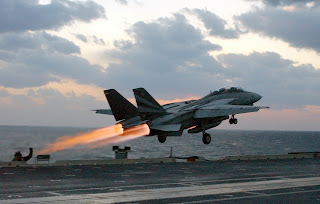 The thrust produced by a jet engine depends on both the engine exhaust's mass and its velocity. Thus, an increase in thrust can be achieved by increasing either of the two values. The turbofan engines used on commercial airliners expel large masses of exhaust at low velocities, which allow them to remain fuel-efficient and quiet at the cost of being large and bulky. (Right): A aircraft taking off on full afterburners.

Military engines, on the other hand, cannot afford to be bulky. Thus, to generate more power, they need to increase the velocity of the exhaust gases, which is exactly what an afterburner does.

An afterburner is located right behind the turbines of an engine. Due to thermal limitations of turbine blades in an engine, all the oxygen that enters the engine cannot be burnt (as this would lead to overheating of the turbine). Thus, excess oxygen is present in the exhaust gases. The afterburner injects fuel into this excess oxygen and burns it, increasing the temperature of the exhaust greatly. This causes a increase in pressure, which leads to much higher exit velocities.

The main use of afterburners is to assist takeoff on short runways or aircraft carrier runways. Other uses include gaining extra speed to punch past the sound barrier and also for evading enemy attacks. (Above): A SR-71 Blackbird in flight with afterburners on.
Posted by Unknown at 10:40 AM