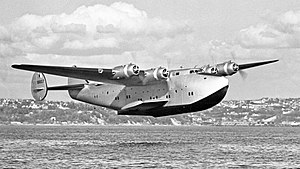 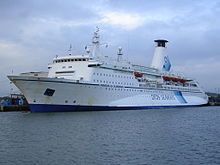 The Clipper was the result of a contract signed by Pan Am and Boeing in 1936. Pan Am had organized a competition challenging aircraft companies to build a plane which could traverse the Pacific and Atlantic oceans and which was also the safest in the world. This was won by Boeing, and Pan Am ordered 6 Clippers at first. Following a upgrade in engine power and the capacity to carry 77 passengers (a large number in those days) and regular air mail across continents, Pan Am ordered 6 more. Each Clipper had a rigid fuselage with several sponsons (a sponson is a side area which helps an object become more stable) which allowed greater stability when floating on water and also helped load and unload luggage. To go across the ocean, each Clipper carrier around 16000 litres of fuel. (Above): A cruise ship with side sponsons (the bulging area).

The Clipper, contrary to today's airliners, was a plane for the super-rich - one way tickets cost 675$, a huge amount even today and a massive amount over a century ago. Each plane had a lounge and dining room and all the seats could be converted into beds for overnight flights. In fact, the Clipper was more like a cruise liner with reference to luxury than a plane. That level of luxury has not been matched on a commercial plane till today. (Below): A picture and diagram of the interior of a Clipper. The pilots and crew of the Clipper were extremely well trained, and were expected to be able to cope with whatever situation arose. Only the best of the best were allowed to fly the Clippers, and most of the crew had to have thousands of hours of flight time aboard seaplanes.

During World War II, the Clippers were put into military service, and the last Clipper was retired in 1946. They were later bought by several small time airlines and were all eventually sold for scrap.
Posted by Unknown at 6:25 PM