The New Horizons probe was launched by NASA on January 16th, 2006. Its aim is to study Pluto, its moons and two other objects in the Kuiper Belt (the Kuiper Belt is a massive asteroid belt beyond the planets of the Solar System and is about 20 AU wide), if they are in the right position. Like most probes travelling beyond Jupiter, the New Horizons spacecraft used the planet's gravity to increase its speed by 4 km/second. During the flyby, the probe was  hibernation to gather data about the planet's atmosphere, magnetosphere, and numerous moons. The spacecraft began its approach to Pluto in January 15 2015, after a long 9-year flight. The first flyby of Pluto will take place in a month's time, on July 16th, 2015. (Above right): The Atlas V 551 carrying New Horizons on the launch pad.

The probe was launched at a speed of 16.26 km/s, making it the fastest vehicle ever to have taken off from Earth. It was launched on a Lockheed Martin Atlas V 551 rocket with 5 booster rockets and a extra third stage for increased speed. It was the first time 5 boosters have been used on this rocket. (Middle right): The Atlas V lifting off from Cape Canaveral. 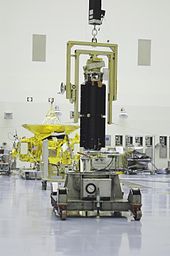 New Horizons has 16 thrusters in total: 4 large ones which provide 1.2 N of force each and the smaller ones providing 0.9 N each. They are used primarily for altitude correction, while two star cameras provide finer altitude changes. The larger thrusters are used mainly for trajectory changes. Power for the various instruments on board is provided by a single radioisotope thermoelectric generator (RTG), a common power source on satellites which are designed to go where sunlight is too weak for solar panels. A RTG generates electricity through the Seebeck Effect (conversion of temperature differences into electricity) and has no moving parts. It contains 11 kg of plutonium 238 oxide pellets encased in iridium and generated 250 W 30 V DC power at launch, which will deteriorate to 200 W by the time it flies by Pluto. (Below right): New Horizons' RTG.

The following is a list of the scientific instruments carried by New Horizons:
(Below left): A picture of Jupiter and one of its moons taken by New Horizons during its flyby of the planet. (Below right): An infrared shot of Jupiter taken by Ralph. 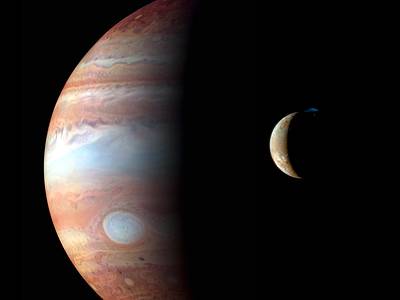