This and the following posts will highlight some of the coolest materials that may be seen in aviation in the next few years. Aerogel is a extremely good insulator and has the nickname 'solid smoke' because of it looks like exactly that. It is such a good heat insulator that if you held a thin  sheet of it over the flame of a Bunsen Burner, you would not feel anything. Also, with enough of this material, one could build a house in the most uninhabitable places imaginable. With a house made of aerogel, a person could theoretically live in space without any heating, because the aerogel will keep all the heat in, despite the temperature difference. An inch of aerogel could have an internal structure so complex that an inch long piece could have a surface area as long as football field. Because of its amazing properties, aerogel could potentially be used as a material in aerospace engineering, which is also why it has over 15 mentions in the Guinness Book of World Records. The picture on the left shows a flower kept on a piece of aerogel. it is not catching fire because of the aerogel's insulating properties.
Carbon nanotubes 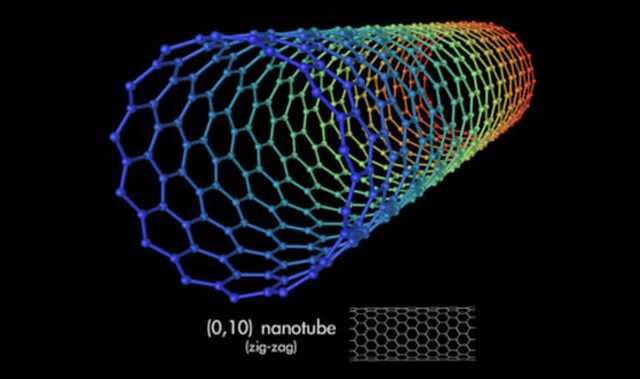